Effects of the Grapple Sequence

The Grapple Component can affect the way Characters move in the game world. In a typical scenario, this would be used to keep characters in place during a Grapple Sequence.

This is done using Movement Data Objects. These Objects are stored in layers on the Grapple Component, which are applied from low to high. The Movement Data Object's purpose is to store movement settings, in the form of a variable structure of type struct_GC_MovementData. The member variables all perform one of the following functions:

Movement Settings can be updated in the following ways: 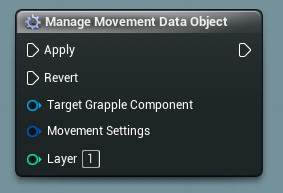 The functions mentioned above require an input of type Struct_GC_MovementData. This variable structure defines the effects of the Movement Data Object. It can be generated using the following nodes:

The Grapple Component contains Events that can be used to instantly set the rotation of the Linked Pawn to be its control rotation across all Connections.